Do you remember the last poem I posted. How  – ” Humans are Fish & they fly above the clouds “
That helped me to visualize my inner voice. 🙂
I was thinking about how my inner voice sounds. And I wan unable to hear anything. I could only see some fuzzy things.
Then It hit me – Instead of a Inner Voice I have an Inner Sight. Soul have many ways to talk to you. Showing glimpses can be one of them. 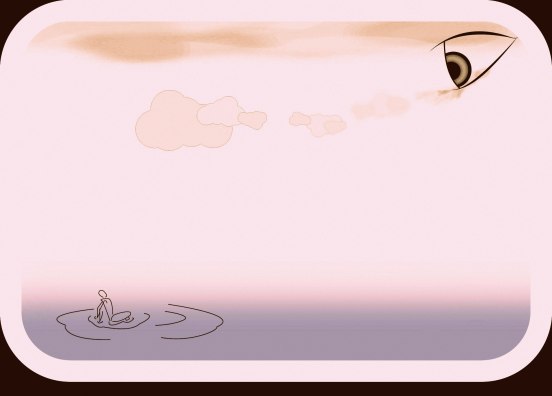 It is there, behind the foggy boundary, afar from my sight.
Always looking at me, with those calm bright big eyes.
Trying to illuminate, asking me to look directly into his eyes.
Unable & scared to share the truth, I look around the sky.

With a painful & compassionate desire, it lets the breeze take the message from it.
Forming light & fluffy clouds, moving forward, piling together.
Slowly the big grey cloud takes form, and I wait ,looking up at them.
Waiting for the lightning to poke some holes & let the drops fall free.
As they rain, I try to look into each drop, hoping to get the message from afar.
I find some bits and pieces of the inner voice, while fail to catch many in sight.

The task to understand them then starts.
Confusion, Frustration, Anger follows hand in hand with Joy and Excitement
I feel bliss at times, falsely perceiving the big picture in my mind.
It is false sometimes, sometimes it is not.
All this time the Eye looks sympathetically onto me.

Trying to tell me, that fool, look down on the surface you stand.
It is not a solid opaque floor for dance.
It is the eternal ether containing all my message for you.
It is the surface where all my projections are stored.
Just let those drops drop on the floor.
And reflect upon the mirror, there lies realization of myself & yours.
If you don’t want to look directly to me then look into the projection.
Don’t be afraid my boy, be brave, like your heart is.
Truth may be painful but it is truth nevertheless.
Listen to me so we both can be free.

P.S – This is part of Dungeon Prompt: Week 3 – Inner Voice. I thought of putting it in a story format but  I liked it in this form. Can anyone tell me what one calls to paras like that??
The picture was made by me.( fast work) One day I will refine it further.
Also, one of my friend made an analogy to this figure with MATRIX concept. Like the drops being only part of code & the big picture is stored in the image of the system itself. We had an amazing chat on that. 😀

Joy & Bijoy, the gatekeepers got bored between the NavRatri Festival.Every god has descended on the Earth in the humans abode.The monsoon has ended & winter is coming, they have to visit everyplace they are revered. So Joy & Bijoy, locked the doors and decided to join the festivites.

Joy asked Bijoy, “Which place should we go,we have only 1day before anyone comes knocking at the doors”.

It was decided then-Kolkata will be there get away for a day.They started visiting each and every ‘Pandal’ or seat or home of Maa Durga, from North Kolkata to the South Extension, from Kaali Baari to small hut temples. Joy was amazed to see so many people celebrating the festival,moving from one place to another, enthusiastic children , devoted aged, men & women revering Maa Durga. He has never seen so many people together even in Heaven. Creativity and genius of the humans has engrossed him so much that he sometime forgot that it was not some artists home but the Deity’s temporary seat. He was amused how humans used so many different and odd articles & objects to build the ‘pandals’. One place had everything built from bamboo, one used the scrap metals, another utensils of prayer. The electric lighting & visual prowess seemed unmatched, each had a different form.That was not all – Durga Maa sculptures and decoration were equally rich & varied. Big & mesmerizing eyes of deity creating both the feeling of awe & fear together. One place had whole scheme of ‘Brahmaand’ painted on the deity’s body, one had 30ft sculpture of Durga Maa and another was so grand that it took his breath away.Mesmerized by the devotional crowd around him and several  style of celebrating the festivities, Joy forgot about Bijoy.

Bijoy was irritated and sad with everything going on there. He called Joy,” Joy! lets leave now, i don’t feel like staying here any longer”

Joy taking note of it inquired,” What happened Bijoy? You only chose this place? Didn’t you enjoyed the celebrations?”

Bijoy said,”No, i am rather disappointed at what has happened to the celebration of the divine mother. Humans have turned so materialistic and ego- centric. See all these advertisements placed all around the ‘pandal’, trying to sell something to the devotees. People are distracted by them.Their devotion vacillates with each movement of their eyes. Even before praying to the goddess, they are thinking of buying something, consuming something.I even saw ads of  alcohol portrayed using conch & lotus.At one place the first shop after the exit from ‘pandal’ was that of cigarettes. Where’s  the devotion!! tell me”.

Joy replied,” Time has changed and pacing faster in the contemporary era. Traditions of humans have changed. Any object can get only a fleeting period of attention, even the Gods.Earlier priests & kings organized these festivals.Now the free market does – it has to take something back to give first.Economy runs the festivals now as it did in earlier eras. But you can’t ignore the crowd revering the Goddess inside the ‘pandal’…”.

Bijoy interrupted,”Revering the Goddess! what are you saying Joy. Didn’t you saw the magical machines in their hands. No one was even looking at the deity. Everyone was busy in clicking a picture, not even enjoying the moment. The small innocent ones were also cribbing for clicking the images. I even saw a family with each member with similar but different machines like this. I thought it was some ritual but they just wanted to ‘Click’.The incantations & the claps of hand has been replaced by the soundless shutters. The value of rituals have degraded to this level.No respect i tell you. Humans have snapped the divine connections themselves.God grace them! Hari Om!”.

Joy’s beautiful picture of the festivities also disappeared. He realized that Bijoy’s observation is the reality and he was engrossed by the place because of his devotion. The magic has disappeared, the crowd looked self-engaged now, all the ostensiveness was feign. He agreed with Bijoy now  and decided to leave for the heaven.

While returning they saw the destruction of the mother earth.Statues drowned in rivers, large mass of waste creeping near the banks and huge pile of junk generated in the 9 day festivities. Baffled they returned to the gates, unlocked it and were back on their duty as gatekeepers.Just then, Narada Muni came there and inquired about the aggrieved faces of Joy & Bijoy. They recounted their recent experience to him.

“Narayana! Narayana! Such are the ways of the divine. It is what it is. It was what it was.So will it be as it shall be. Maa Durga loved her creations earlier and still loves them,howsoever be the imperfections they have. The Goddess is still revered respectfully though in another form. A form which always keeps changing.”,clarified Narada. He asked Bijoy,” Tell me Bijoy, did you saw the 1,00,00 faces of Maa Durga?”

Bijoy replied,” No ! holy saint, we returned in mid-way.But i think we visited more than 1000 places”

Narada smiled and said,” Narayana! Narayana! You visited the places but you didn’t observed the million faces of the deity which walked beside you, visiting those places.”Saying that he entered through the gates, leaving the keepers with some satisfaction and peace.