You know about my goals for this year (check here).

I am working on the coding this blog from scratch; hacking using resources on the web. And to make it clear – I am a computer science graduate. 😛

However, for the last 2 years I have been far far away from any programming language. I was busy pursuing other goals (tedious goals). I want to brush up my coding skills now. And it is getting annoying and exhausting for me. 😦

I am tipping on small small stuff. I am unable to write a good piece of code by myself. I am constantly asking the Google God about possible solutions. As I see it, I have not lost the basic concepts yet. Though, the language has taken new forms, so many new functionalities have been added. I am trumped by the amount of things you can do so easily now. I am still struggling even with improved functionality.

Now I understand how it must have felt when people used to come to ask about coding to me. I mean they were smart but still had problem figuring things out. *Sigh* I have a similar conditions now. And I do not even have anyone to ask about such little things, except googling. 😛

Further, about standards and professional looking site and code – I am still in amateur group. I am frequently trashing my designs and codes because they look shitty to me. It gets frustrating to end up with a bad output after hours of work. 😦

I am moving forward with half baked products now. I want to get to some end product – a good enough site. Then I will keep on iterating the process until I make it good enough. I wish to do it fast actually, like before the end of next month.

Well, do tell me if you have some good tip on writing a code. Actually tell me about some way to learn the new languages fast. Would really help ?

Yesterday I realized, only half a month is left for next year to knock at the doors.

Then I searched for what I was writing and thinking last year around the same time. Last year, i decided to act & start doing things which I would like to do and not make excuses for them. Now when I check them I ask myself – how far I acted on them?

Check this – for last year in view

I know I have again faltered on so many deadlines & projects which I wanted to complete by the end of this year.

But before I answer the question about ‘How Far’ – I looked again at the calender. I have 15 more days to go. I can walk, actually run, in these coming days to cover more ground before the year ends.

Right now I am working on designing this blog theme from scratch, more of hack it. It will be simple in interface and little bit weird on design part. You must have seen the side bar has suddenly missing many widgets – I accidentally removed them. I am not interested in putting them now. I am just looking for basic functionality I need for this blog.

Plus I am reading, a lot. I have to finish as many books(i think 7-9 books) as possible before the year end.

And I am writing also – here & in my log & in my rough drafts for short stories and novels.

Finally, socializing & travelling. I will be moving around in the coming few months. It will be fun. I will have more stories to reflect my stories.

P.S – How far I covered my path will be posted in the new year guys.

Finished reading it in Two months, what a disgrace(not this book).

A Whole New Mind (Why Right-Brainers will rule the Future)

You know TED Talks , yeah you must have heard about it.If not check it out – they are amazing. I picked up this book after I watched the Daniel Pinks Talk on New Age paradigm shift. His concept looked enticing from the first sentence & I looked up his work & got to this book. This type of books are my cup of tea – Non-Fiction Contemporary work. The book proposes the idea of the next paradigm shift in the human society from L-directed thinking to R-directed thinking. Pink puts some convincing arguments to support his idea. And as for me, I do believe in him to certain extent.It is written in a narrative style where it seems Pink is giving a lecture on the whole concept. 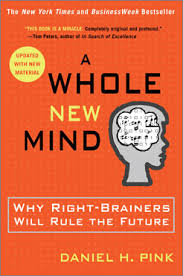 The book starts with Pink inside an MRI machine giving out cognitive tests. The cliched idea of L-directed thoughts & R-directed thoughts are put forth. The main point was only to classify the two types of thinking style. By no way it acknowledged the one-sided thought process( as it is not so, we all are bi-lobed thinkers with some imbalances between their utilization). After that comes the three basic questions which are changing the world at present.

1. Can someone overseas do it cheaper?
2. Can a computer do it faster?
3. Am I offering something that satisfies the non-material transcendent desires of an abundant age?

Try answering them. The answers to these questions are, what has been tilting the scales in favor of R-directed thinking : Asia, Automation & Abundance. The presence of these in a globalized world is pushing the Mans’ ability(read Wests) to R-directed working style.The book then goes on to put facts & some western world trend supporting the influential power of above three factors.Pink then puts his idea of ‘Moving to the R-directed Thinking‘ – well to save the west from getting overwhelmed & perish.Then he presents the six aptitudes required for the R-directed thinking in the conceptual age viz.
Design, Story, Symphony, Empathy, Play, Meaning.

After that Each section takes up one of the above aptitude & explains through it using quotes & anecdotes from various research, reports & people.At the end of each of that chapter there is a list of things which one can use to inculcate that aptitude.And that’s it, the book ends at the ‘Meaning’ aptitude.

Now about my take on it. I read through some criticism of it before writing this review. And I agreed to some of them. Though one thing was common in all of them( even the criticisms)  Daniel Pink proposes a plausible & convincing idea. And he really does – we all can see that world is getting saturated now with abundance & paced production centers of goods & services. To get noticed in this deluge of items one has to innovate & there comes the R-directed thinking. It is obvious by now that creativity has to show the path now, the time of smoothing out techniques using technology & skills are over. Now is the time to innovate – awesome,amazing, crude, ugly,beautiful, crazy… – stuffs. Then again the L-directed thinking will come into play to streamline & smooth-en it.

However, all that looks good when seen from the Western world perspective.But what happens to country like mine(India) which is in Asia. I think it’s obvious that we will also be soon shifting to the R-directed thinking(Very soon). The peculiar point about Indian diaspora is the social structure & the work structure. The no. of people getting affected by this change will be huge but the no. of people who would be able to shift to this new culture will be too small. The most active players in the changed situation will be the Indian Middle Class.Only they can even care for such transition & they will surely ignore & criticize it.From the look at the present scenario & thought-process with the added problem of ‘risk-averse’ attitude if Indians, this transition will be very tumultuous here. Some who will take the lead here will fail in near future but may be also able to ride the new global trend wave in India.Well, it is only a topic of speculation to think of that way for Indian mind-space.The future will tell about the truth in it.

Leaving the ideas apart, the book was like a composition of great mind-titillating thoughts. I would have loved to quote someone the stuff i noted down from the book. Being a design lover & creativity seeker, this book was one to own.The best things were the references given in the book (a lot many of them).At the end of the book there is a long list of references & books  for further reading- I wish I could have also gone through them( perhaps I will). The section of Design, Story,Symphony & Meaning appealed the most to me. The part of Meaning & Play where psychological studies were given was interesting to know about.If you like you can also take some of the psychological tests (links from the book), I went through them & got to know something more about me.

I would recommend this book to you if you have similar taste as mine.Or if you are in an industry or work-area where such transition will affect you or is affecting you. After all (quoted) – “Today we’re all in the Art Industry”.(For Indians, we will be or we are going to be) 😉

P.S – This book presented to me some moral work dilemmas like Will it be OK if the new work will be low-pay? & would not require much education/training? or will leave a major population into more destitute level of life-style? They are for later posts(if i get time to contemplate over them)